Watch on Coast to Coast AM

Tourists aboard a wildlife cruise in Australia were treated to an incredibly rare sight when they spotted a mature white crocodile swimming in the water.

The ghostly reptile, believed to measure around 10 feet long and given the nickname ‘Pearl,’ was seen on the Adelaide River during an excursion by the Spectacular Jumping Crocodile Cruise.

According to wildlife experts, the creature’s coloring is due to a condition known as hypomelanism, which causes low pigmentation of the skin. 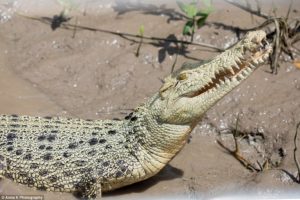 While the condition is not altogether uncommon in crocodiles, the fact that the creature was able to survive its childhood, when the pale animal would have been particularly vulnerable to predators, is seen as quite remarkable.

Indeed, the discovery of Pearl has captivated wildlife watchers in the area as one elated individual told the BBC that “I spent most of the day in tears watching her.”

With that in mind, keeping an eye on the creature may be the ideal way of appreciating Pearl, since it is suspected that she may be related to a similar-looking white crocodile that was killed after it ate a fisherman in 2014.