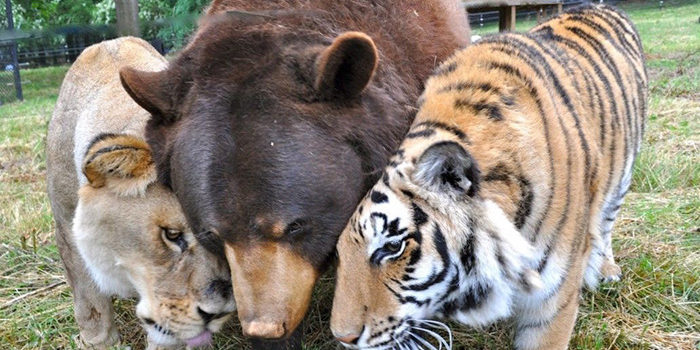 Baloo the American black bear (Ursus americanus), Leo the African lion (Panthera leo), and Shere Khan the Bengal tiger (Panthera tigris tigris); known as “The BLT” came to Noah’s Ark in 2001 after they were discovered by police officers in a basement of an Atlanta home during a drug raid. At only a few months old, all three cubs were frightened, malnourished, and infected with internal and external parasites when the Georgia Department of Natural Resources brought them to Noah’s Ark.

Baloo the American black bear was in the worst condition of the three cubs rescued with a severely ingrown harness digging into his flesh because it was never loosened as he grew in size.  The harness was so ingrown that his flesh had begun to grow over and around it, and surgical intervention was required to remove the harness and clean his deep, infected wounds.  During Baloo’s surgery was the only time the three brothers have ever been separated from one another, and Shere Khan the tiger and Leo the lion became extremely agitated because of it, pacing and vocalizing for the lost member of their family to return.  After his surgery, Baloo was returned to his brothers and the three have been together ever since, with hardly a quarrel between them.  Baloo is a very confident and relaxed bear and will do anything for a sweet treat.  American black bears are native to most of North America and vary greatly in both size (the largest recorded was over 800 lbs) and color (can be black, brown or blonde).  They are skilled survivors and have a conservation status of “least concerned” despite the increasing number of human/ bear conflicts.  Baloo, Leo and Shere Khan eat, sleep, and play together and even seek out grooming and affection from one another, head rubbing and licking each another.  Their terrifying early months in life bonded the three together and they are truly inseparable despite their obvious differences.

On August 11th Noah’s Ark said goodbye to their beloved Leo, the 15-year-old lion in our “BLT” trio. During surgery,  veterinarians discovered that over 80% of Leo’s liver was full of inoperable masses and because of this, the heart wrenching decision was made to let him go. Leo’s brothers, Baloo (bear) and Shere Khan (tiger), were able to say goodbye to Leo and have been doing well since his death. They are being watched closely by their keepers and are given plenty of extra enrichment & attention. Animals are so perceptive and with the incredible bond the BLT had since being rescued together from a drug dealer’s basement in 2001, it is highly likely that Baloo and Shere Khan knew their lion brother was terminally ill long before Leo began displaying outward symptoms. Leo was buried by the trio’s clubhouse, which was their favorite resting spot. Even in death, Baloo, Shere Khan and Leo will always be together.

Read more about the trio in this article from HuffingtonPost.com or visit Noah’s Ark on Facebook.

BLT (Not a sandwich) but a wonderful story
Tagged on: BLT    Noah;s Ark